I won’t contribute to F-Droid anymore.

@ariasuni Free software needs to be disconnected from politics. Judging someone as good or bad is not the purpose of FOSS. Repositories in FOSS cannot and should not get burried in the app police role that Google and Apple have taken.We need to be better than that. If you don't like projects, you can speak out, and you have, and that's good. But asking someone to silence something you don't like is itself fascistic.

@djsumdog
> Free software needs to be disconnected from politics.

Free Software was political from the beginning, because of its ethical and ideological motivations.

> Repositories in FOSS cannot and should not get burried in the app police role that Google and Apple have taken.We need to be better than that

How the fuck fighting against hate speech is the same than Apple and Google protecting their economical interests??

> because of its ethical and ideological motivations.

Which revolved around being able to inspect code and fix things. It had nothing to do with race, sex, gender, or anything other than just being able to fix code. It's like saying to God "give me the source code to our damn DNA because I can't decompile it." It was not about the politics you think it was (maybe RMS's abortion comment in glibc?, which is gone now anyway).

@ariasuni If you label everything you don't like as hate speech, you're never going to grow as a person yourself or influence those who disagree with you. Speech is speech. It's not violence. Also from that thread; the people on that instance seemed rational. Maybe talking is better than screaming. I'm sick of everyone just calling everyone else Nazis or whatever and not actually talking. When you talk, you learn about each other and why you have concerns. Then you can move forward. Together.

@djsumdog
> But asking someone to silence something you don't like is itself fascistic.

1. It’s not something «I don’t like», it’s something that actively and blatantly hurts marginalized people. That’s a *fact*.
2. No it’s not. I don’t know, just read Wikipedia or open a dictionary, you’ll see how much saying this is bullshit.

Seriously, I just want F-Droid to not support or facilitate hate speech, and you’re saying I’m a fascist. That’s so fucking backwards.

fascistic != fascist. It's fascistic. I'm not labeling you, but I think you're ideology in this point goes against moving forward together as a human race that is moving towards a better world. Silencing people for x, y or z does not move us forward. It is so easy to label x as "bad" or "nazi" or "hitler" and you close off actual, real, legit discussion.

How the fuck fighting against hate speech is the same than Apple and Google protecting their economical interests??

It’s not - but it’s taking a similar role: moderating apps. Once you start moderating apps, you run into many issues (what should be allowed, what should be banned, my app got banned unfairly, etc). F-Droid currently has a simple process that can be applied to any app with no subjectiveness: is it open source? Anything subjective can be abused, justify censorship, etc, and the open source world should not do it.

This drama is very tired though, they’re not gonna agree no matter how much you complain (which is a good thing).

> It is hate speech. It is violent.

This is where you are absolutely, 100% wrong. Speech is not violence. This is from the book Coddling of the American Mind (p98-99) which explains what's so dangerous about that particular concept creep. 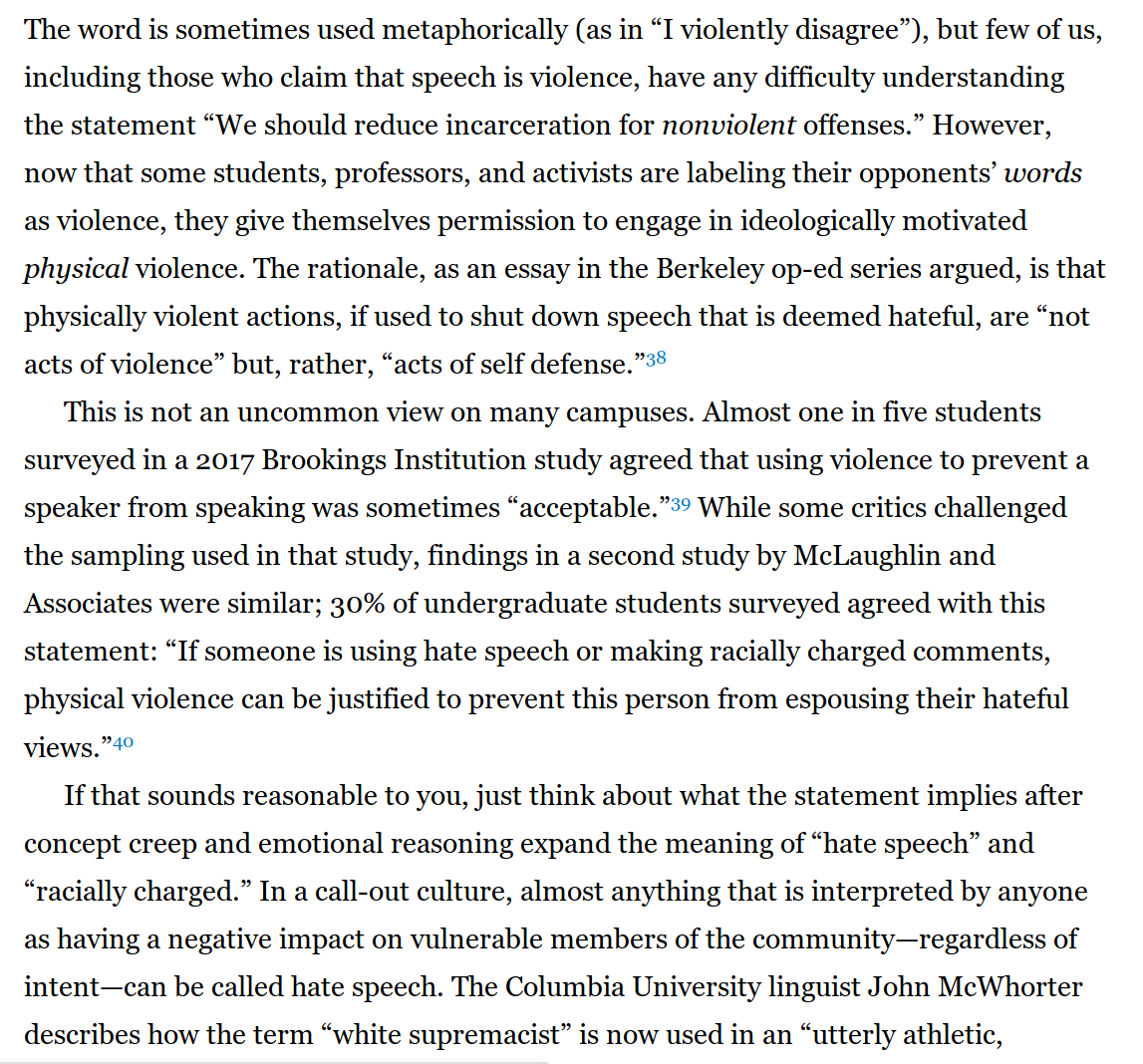 @Thib No. That's not violence at all. That's literally still just words. From the same book. @OCRBot

@djsumdog I could also say that your definition is 100% wrong

The words by themselves do not have harmful consequences, it's the actions. You know at one time it was greatly offensive to say god doesn't exist, or that homosexuals should be acceptable at Oxford or that the Bible should be translated to English? Brenden O'Neil does a great talk about this. Were those ideas violent? They were just ideas, but people took action against them. Freedom of speech protects ideas.

@djsumdog words do not have harmful consequences, right

What if you grew up around people telling you you were shit, all the time. As long as it's just words, that surely wouldn't have any consequence on how you'd grow up and construct yourself.

Fascist propaganda is also just words, I'm sure that without it, actions would have been exactly the same.

fluffy@freespeechextremist.com
@ariasuni @djsumdog
>> Free software needs to be disconnected from politics.
>
> Free Software was political from the beginning, because of its ethical and ideological motivations.

I don't think you understand free software at all if you think that it is connected to gender identity.

There are things that are not about you, you know? Free Software is not a soldier in your fight. This should have been totally apparent from a first reading of GPL: it is precisely created so that anyone, any race or creed, communist or capitalist, has the right to use it. Yes, this includes fascists just as it includes trannies. This topic has been discussed at length in many places.

>How the fuck fighting against hate speech is the same than Apple and Google protecting their economical interests??
Renaming something does not change it. Here you write as "fighting against hate speech" the action of mass reporting and lobbying to deplatform free software which is politically undesirable to you specifically. It's dishonest writing and you know it. Frankly you should apologize for attempting such a manipulative slight of hand.

@djsumdog and again, the initial point was to not have what amounts to a flyer for an instance based around hate speech be stored, distributed, and put on the frontpage of F-Droid

If it's fine because those are just words, I guess an app calling for the death of all Free Software activists would be just as good as long as it is itself Free Software

> death of all Free Software activists

In America, speech has limits and specific violence against a person or a people is generally not protected. But it varies on the case.

And F-Dorid is purely concerned with: is the software free/libre. It may just be a rebrand, but forking in the OSS world for minor things is pretty normal: XFree86 vs Xorg. Amazon rebrands FOSS offerings all the time (Reddis -> ElastiCache).

Why are you so afraid anyway? If they're so wrong, they won't last.

> It’s not something «I don’t like», it’s something that actively and blatantly hurts marginalized people. That’s a *fact*.

Right before WW2 happened, the fascists also believed that through freedom the richer people were marginalizing the poorer people. From their perspective, they were just trying to protect their marginalized selves.

Fascism is derived entirely from socialism, but with a little twist, where they realized that socialism would never help reaching the communist utopia, yet the leaders didn't quite feel like just giving up all that political power that they've attained.

So they sought out to continue to get rid of freedom by centralizing all power to the state, thereby creating a totalitarian rule, that would later naturally cause millions of deaths. Therefore, to say "censorship is fascistic" is not backwards at all. But considering the amount of freedom taken away under a fascistic dictatorship, to insinuate, that anybody who desires freedom is therefore a fascist, is quite laughable.

Because you believe that human rights are less valuable than some enlightened sacred truth that you hold. Just like the fascists and communist and socialists of of today and of the 20th century, who held the same principle, and then put it into practice. They had their own excuses which they thought were very good reasons to justify human rights violations, such as censorship among many other terrible things.

So far as they are concerned, the one who violates the sensibilities of the "dear leader", he does not deserve human rights and the heavier the pointless punishment and torture and murder, the more "virtuous" the zealot who is carrying it out. When you play a part in making human rights a secondary priority, don't be surprised when your own human rights end up violated and dismissed.

Unlike you, i wouldn't take such a risk. So I would much prefer that F-Droid stands on principle and facilitates freedom and transparency.. after all, isn't that the primary purpose /free software/?

Free software is incompatible with political correctness, codes of conduct are a kludge to bypass the "no discrimination" provisions of the Open Source Definition.